Glow in the dark path in Cambridge - Starpath from Pro-Teq


Here is a news article on Cambridge's new glow in the dark path way. It is used in Christ's Pieces.

Press release is at end of this post, indicating the glowing surface technology is patented.
It is claimed to be the first  ultraviolet  powered path, but has anyone seen it work?

Here is the video from the Daily Telegraph.

The patent referenced  on the web page in the bottom left corner  is: GB2472474  as here. (Depending on your browser font size, this patent can be hidden in error.)
The patent documents and history are here. I read the patent  and could not find any method described or claims to creating the glowing path. 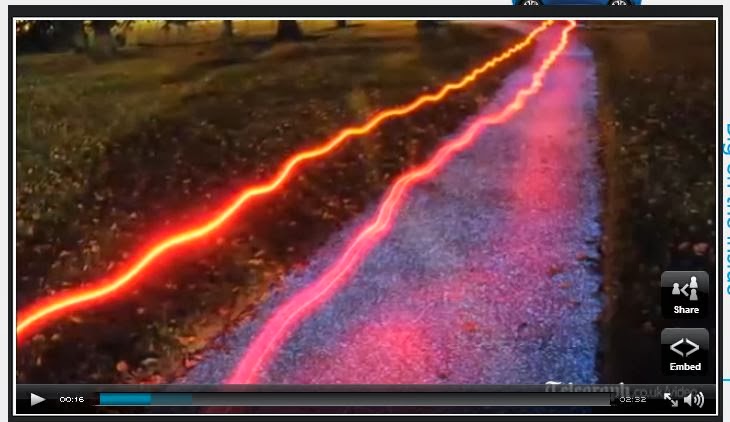 So, how were the above pictures taken showing the glow?
You can see that the image above shows a  picture of a moving cycle lamp, taken over several seconds. This very long exposure allows the ultraviolet  particles to be visible in dim light - to a camera. Five trusted people I know have looked at the path in the dark, seen darkness  and wondered if it worked.

Natural minerals that glow blue in the dark include fluorite and others as here. 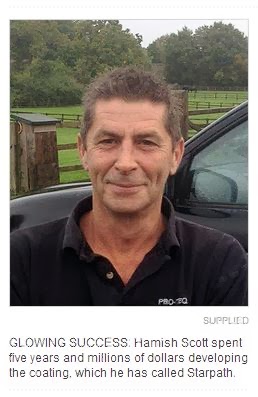 I communicated with the inventor, Hamish Scott,  this morning and there is apparently  now no patent with respect to the glowing path, (contrary to press release below)  but just  photo luminescent particles, a natural earth product,  sprayed on the path. The ultraviolet is absorbed in the day and emitted in the dark. A very impressive design.
I am waiting to hear what the actual substance is as we need some in our street being pitch black in our corner at night!
Starpath costs about £75 a square metre to apply. 150 square metres were covered in total in Christ's Pieces giving a total cost estimate of £11,250.


Starpath  is similar to COREglow here. COREglow can also be provided as photoluminescent aggregate set in tarmac and glow for hours.

We can go to Amazon UK and buy these Coreglow  glowing rocks. 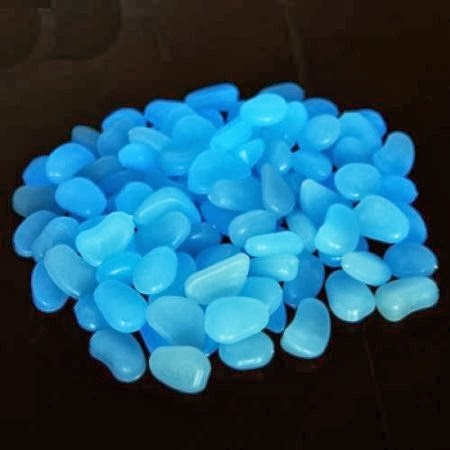 I will update my blog when more details revealed from Pro Teq. Update, no replies from Proteq as of 1/11/2013.

Pro-Teq Surfacing UK Ltd, light the way with their innovative re-surfacing methodology demonstrating how STARPATH could help City Councils around the UK recognise the potential savings in local and national government energy bills.
STARPATH could be an alternative to street lighting.


SURREY - - 17 October 2013 - - Pro-Teq Surfacing (UK) Ltd, developed and patented a world first for spraying a liquid based product in combination with either soft or hard media. This innovative pathway re-surfacing methodology called STARPATH is the result of an extensive period of chemical trials. Comprising a multitude of product samples, mix ratios and application techniques. STARPATH is currently being trialled in Christ’s Pieces, a well-known park in the east side of the centre of Cambridge by Cambridge City Council.
This product is extremely cost effective to both install and maintain while its seamless surface may be applied to any existing surface, be it concrete, tarmac, timber or any hard stand substrate (solid base). The aggregate material absorbs and stores energy from ambient light (UV rays) during the day, then releases this energy at night allowing the particles to glow (see picture attached and link: http://www.pro-teqsurfacing.com/playvideo.html for video reference).
Pro-Teq Surfacing (UK) Ltd believes STARPATH has considerable environmental appeal beyond the obvious reduction in council bills. As a resurfacing technique, which does not require the existing surface to be removed, the Pro-Teq alternative has immediate advantages over those products offered by its competitors, including savings realised through carbon credits, reducing the council carbon footprint. It eliminates the substantial cost of removal and disposal of the existing surface, ultimately enhancing the ‘green friendly’ reputation of those organisations choosing to install Pro-Teq’s products.
Hamish Scott, Owner of Pro-Teq Surfacing (UK) Ltd said, “There is nothing like STARPATH in the world, this product adjusts to the natural light, so if it is pitch black outside the luminous natural earth enhances, and if the sky is lighter, it won’t release as much luminosity – it adjusts accordingly, its almost like it has a mind of its own. It is exceptional. At Pro-Teq Surfacing (UK) Ltd, we use natural earth products and it cannot be replicated by any other source; you need to physically see it to believe it, this is pure nature doing its work”.
As outlined above, STARPATH effectively generates its own energy during the day while radically enhancing visibility at night, which assists pathway users. It is certainly a sustainable surface, perfect for cyclist and disabled access and has a high safety margin with its anti-slip properties. It can also help to reduce the risk of collisions between cyclists and pedestrians at night without having to resort to artificial painted centre lines. The aggregate is a non-reflective light source, the lack of any glare off the surface further enhancing its acceptance in more populated areas. (eg: if this product were to be laid on a driveway in a private residence, there would be no adverse impact on neighbouring properties).
This product has recently been sprayed onto the existing pathway that runs through Christ’s Pieces open space, Cambridge between the city centre and the Grafton Centre, and is used by pedestrians and cyclists during the day and night.
The Cambridge pathway measures 150 square metres, took only 30 minutes to spray the material on, and the surface was ready for use less than four hours after the job commenced. This short installation time allowed minimal disruption to the public.
Hamish Scott believes STARPATH is more than cost effective for councils, as councils around the country are currently turning off street-lighting at night to realise energy savings. STARPATH provides a viable alternative, which provides for safety at night, whilst also being cost effective.
Hamish Scott said, “Councils spend significant sums of money fully replacing existing pathways when the existing surfaces have reached the end of their practical life. Our product is cost effective, fast to apply and fast to set, is an anti-slip surface, while the client has a choice of size and colour of aggregate. Once the aggregate is laid we apply a finishing coat, which is specially formulated to ensure the surface is water-resistant, and provides longevity to the finished product. Further, the surface is environmentally-friendly and aesthetically pleasing”.
He continued, “We are so pleased Cambridge City Council has agreed to trial the product. STARPATH has attracted much interest from the public, in Cambridge and other councils in the UK. We continue to refine and adapt the product to ensure it meets the on-going needs of our customers and the environment”.
It seems Pro-Teq are ‘streets ahead of the rest’ and are clearly welcomed by many. Pro-Teq has earned an outstanding reputation for repeat business from key customers, primarily because its customers recognise there is a significant technology and environmental gap between Pro-Teq products and more traditional resurfacing options.
Pro-Teq’s website details how it’s re-surfacing solution works, and the technology behind it, the website also includes a photo gallery showing its portfolio and a short video demonstrating the Pro-Teq team at work. 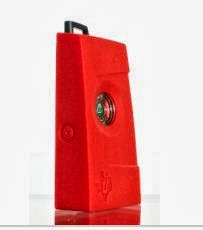 Wireless sensing or The Internet of Things has been around for a while but at last we have a multisensor  device for £25 . People have designed many wearable health and sports monitoring  applications, initial research by me at Microsoft in 2001, so  below I cover some new useful designs for busy couch potatoes, including The Door Monitor, Watch My Cooker, Cat Burglar Alarm and finally Am I Alive? It looks like these can be practically built and tested and used by people with Smartphones.


Nov 2012 Texas Instruments  announced  a multi sensor wireless device  (6) for  £25, inc shipping and tax with all the hardware sensors included. This looks like a loss leader price for development purposes  but will be delighted if can stay at this price. I have seen many sales promotions for this but not sure how many shipped as not many third party apps on the web.  I am due to get  received one on  7/10/2013.

This devices makes obsolete many other wireless sensor hardware designs. I will be very pleased to start creative programming on  it  without worrying about my hardware design issues such as eyesight,  wires falling off, batteries, antenna design  etc.
Texas have done a great job with this design, A SOC with built in Bluetooth and  8051 8 bit microcontroller for low power, and also the heavy duty signal processing  is done on the smartphone device. The CC2541 SOC is around $3.08  in 1000 off quantities, i.e. the Bluetooth and microcontroller but no sensors. At this price, a design can be made disposable. 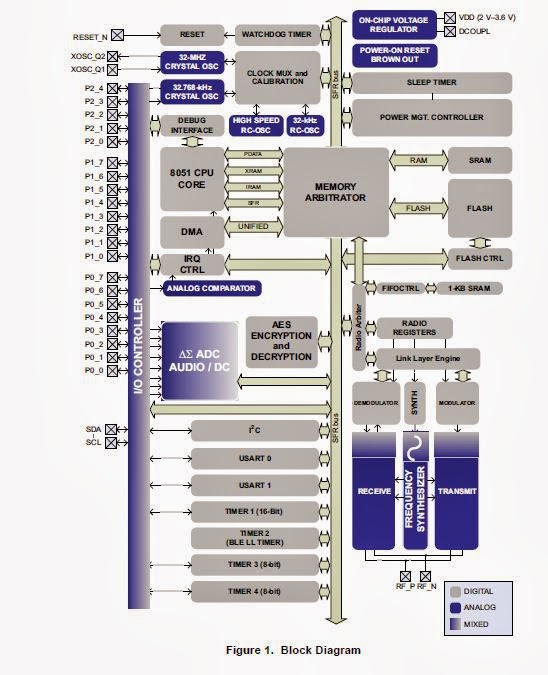 It can be used with low energy Bluetooth e.g the  iPhone. 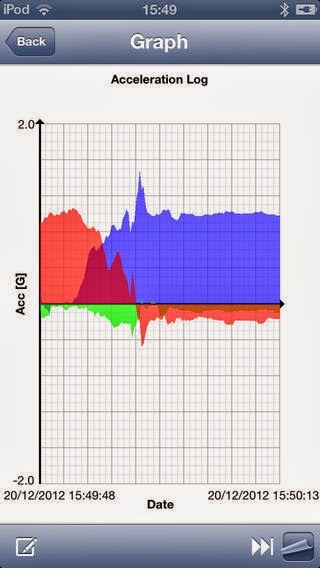 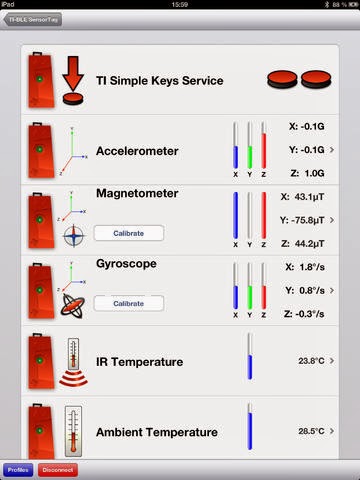 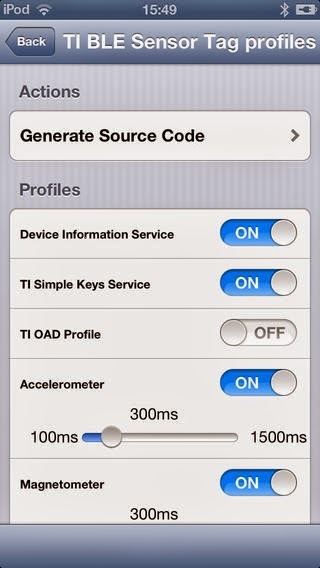 Here is the spec.

You will find most  the above sensors in smartphones but remote sensing has many more applications.

All I will add at first  to the hardware for my designs  is a neo magnet for attachment to walls etc. Modern homes have steel pillars in unexpected places e.g.  hidden behind the plaster.

I also require a waterproof version and the PCB and a larger battery will fit inside a  35mm film cannister  ( internal  64mm in height and 38mm diameter). Buy from eBay.


Here is a teardown. 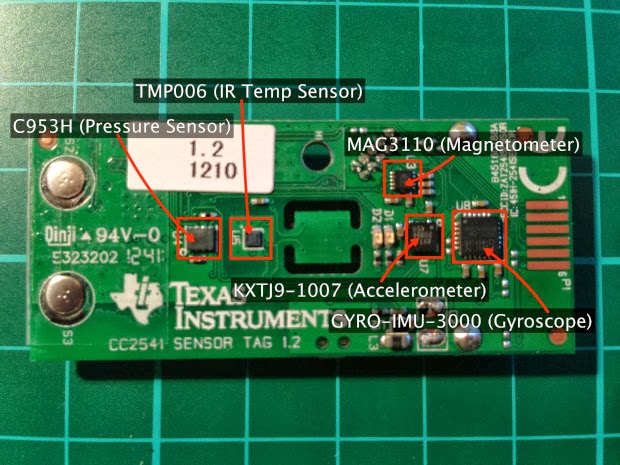 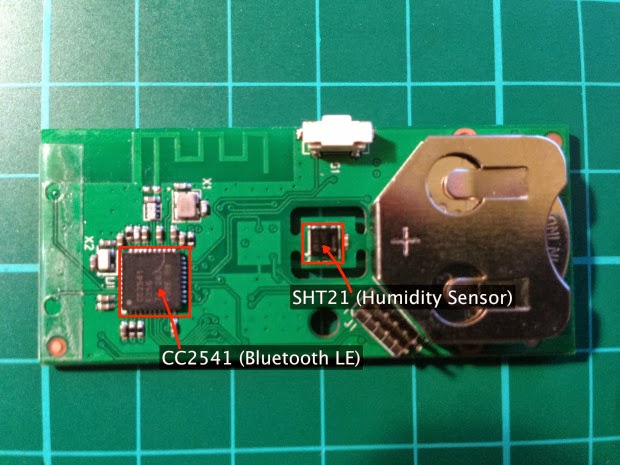 
Texas and others cover many of the usual wireless sensing designs including sports applications, games controllers, wristwatches  and  the perennial lost key detector. Below are some new ideas  for couch potatoes.

After I have learned how to program the SensorTag, the first object I will attach it to is my front door, with messages sent to iPad.

Yes a camera can be used but also useful to have simple text alerts sent to your smartphone, tablet, etc. 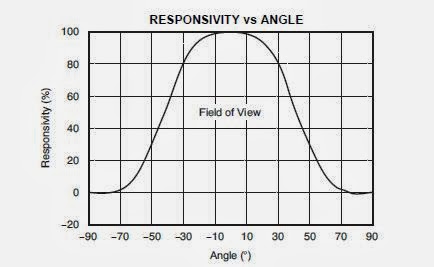 
The Sensortag.  has a thermopile for measuring heat at a distance,(-40C to 125C)  ALSO humidity, steam  so can point at gas cooker hob and message sent to ipad/iphone if pots boil over. Useful for forgetful cooks, Alzheimer's and dementia. 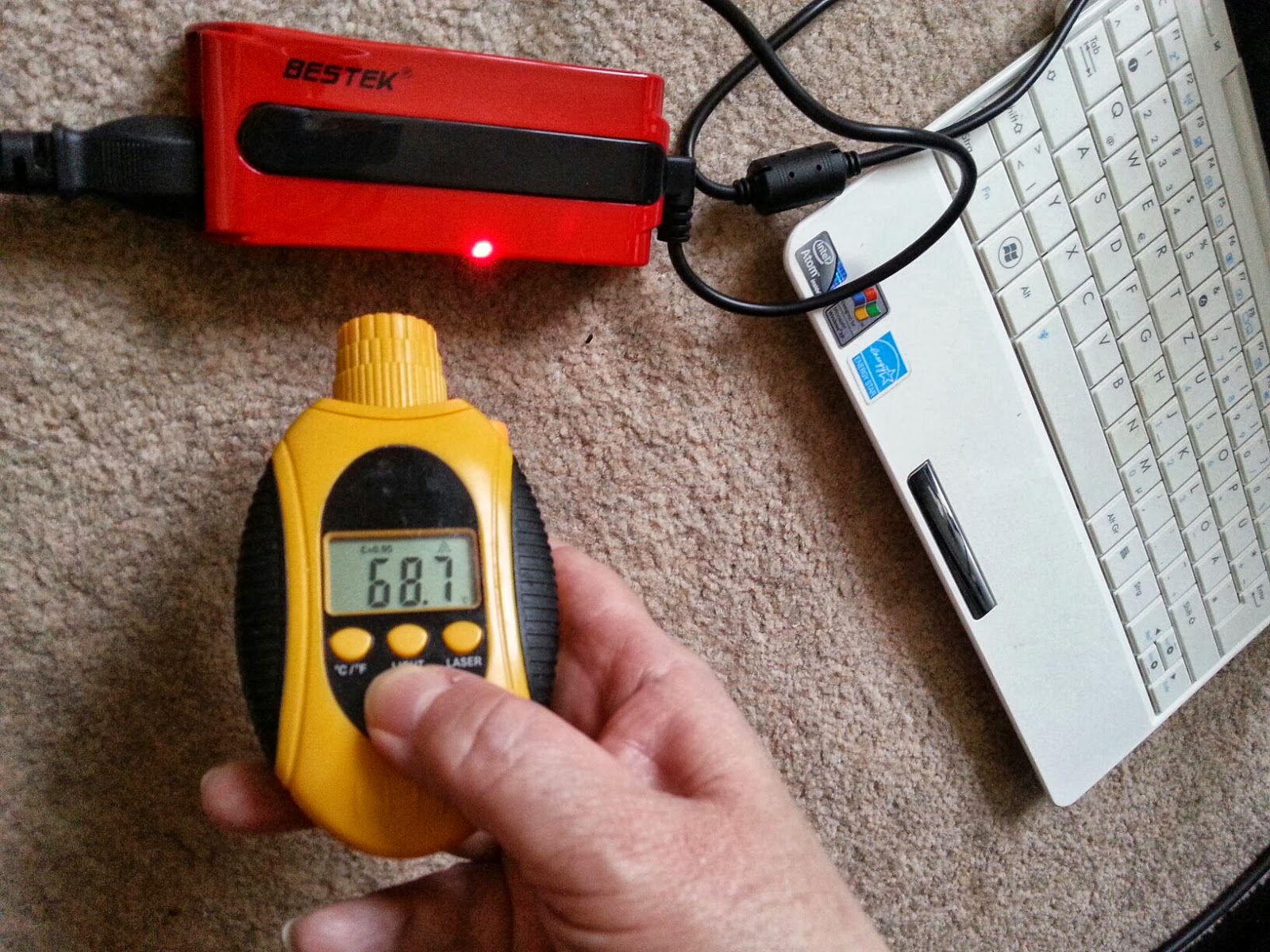 
Adding a Sensortag to a fridge door provides the imagination with many uses, such as diet control and care of people who live on their own. (if you don't open a fridge for a while, are you well?).


I might write something simple to test it with like cat burglar alarm, 50m range to ipad. Using the wireless accelerometer , can use direction to count N cats IN and OUT on cat flap, and if N+1 IN counts,  it implies it  the neighbour's big cat!  Saves me getting up at 5am to sort out cat fights and who steals the food at 3am. (My cats sleep  upstairs). 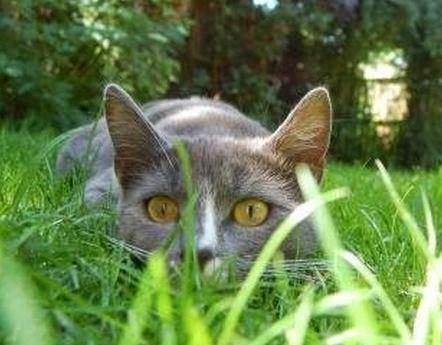 And finally, Am I Alive? Wireless accelerometers useful for fall detection on people. They really need to be small enough to add to devices like spectacles (thank you AM for this idea) so people wear them all the time. An accelerometer can also be worn on the chest for respiration monitoring, so the SensorTag may be applicable.