There has been enough comment from others re the loss of  Apple's   iPhone 4G on a bar stool and ending up in Gizmodo. People haven't asked, why was it found on a bar stool? Would person have placed it there and just walked off? Unlikely. It could well have slipped out of the pocket.  When I last visited Apple in Cupertino re sale of patent of my Invisible Phone  for iPhone sensors, the Apple person I met with was startled that my iPhone was in a pink  silicon gel case. I put it in this case as  iPhone as slippery as a bar of soap. ( I dropped it first day I had it on concrete, while trying to take a picture.) Apple attorney  said the designers would not like this as spoiled the smooth surface of iPhone which is designed to slip  in (and out) of  man's back pocket of trousers. I replied that ladies do not normally put phone in back pocket and I said if I did, I would not want it to slip out. Maybe this is what happened with recent loss of prototype. 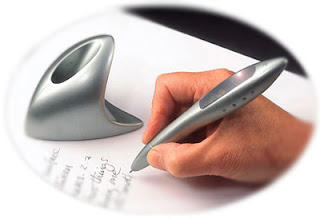 There are far easier ways to find out what might be in future Apple products than checking out stools. A perusal of my 1997 BT SmartQuill  patent Apple bought recently covered here in The Guardian and patent  as here  shows a portfolio of sensing systems for phones. This is all in the public domain.

Interesting to note, that one of only two working SmartQuill phones as above was stolen from The Millennium
Dome in 2000.
I am now designing sensors for phones for the next 5 years, including 3D hand trackers,  not for Apple but a well known Far East phone company and others if interested . I am not allowed even to say if a Non Disclosure Agreement exists.  I also  have a system that will alert person if more than a few feet phone their phone. This is old technology based on radio systems that alert if a parent losses a child in a busy shopping centre.

I am still looking for the lanyard fitting on my iPhone....
Posted by Lyndsay Williams at Friday, April 30, 2010