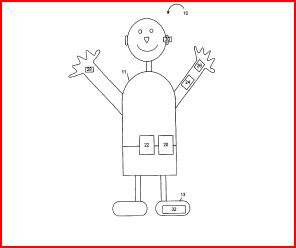 Explained in this article in The Guardian  2004,
"Computerising the body: Microsoft wins patent to exploit  network potential of skin" as here
In simple words our design (Williams, Vablais and Bathiche*) was to allow devices like headphones for your Ipod be attached to the ears without using wires or batteries in the earpiece. It is also useful for medical sensors to be attached to the body without wires.  I heard after I left Microsoft that the US military were also very interested in using this technology for their soldiers. The prototype I built and tested on my daughter in 2000 allowed audible music tones to be transmitted to a loudspeaker on her skin when I touched her, no batteries or wires on her.


It is interesting that Microsoft's lawyers  are still working on this technology 9 years after it was first prototyped as  patent has additional wider claims published July 2009, example as below.


From the US Patent Office Patent application published July 2009

Claim 1 " A system that facilitates reduction of wiring in connection with networking portable devices, comprising:a plurality of devices that are electrically networked together via a human body, which serves as a transmission medium for at least a subset of the devices."


Will Microsoft license this technology?


*Steve Bathiche was one of the inventors of the  Microsoft Surface computer.


Drawing above  done by Microsoft's lawyers for the patent.