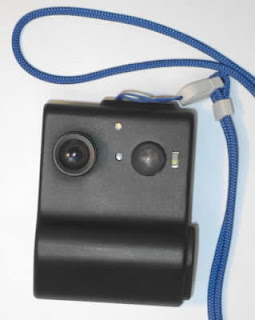 The SenseCam case has had small changes  since my first minimal design of 1999 then 2005, case molding by Microsoft Hardware Group.

Why so minimal? I design all my computers with no on/off switch, I use sensors like accelerometers or light to power on/off design.

From left to right, you can see the 104 degrees wide angle lens, enough to capture image of your shoes, LED status indicators, Passive Infra Red Sensor (PIR) and light sensor. The bump is for the AA cells, a lot easier to find in a hurry than a Lithium charger. I am interesting to note that the new Sensecam still uses a huge filter for the PIR.

The lanyard was nice and simple - until someone decided to "upgrade" it to magnetic catches using neodymium magnets. I had to quickly email one of our principle Microsoft Researcher users of sensecam, who had a heart pacemaker, to not be alarmed. Neo magnets are 5 times more powerful than normal magnets, and used to control the settings of pacemakers! 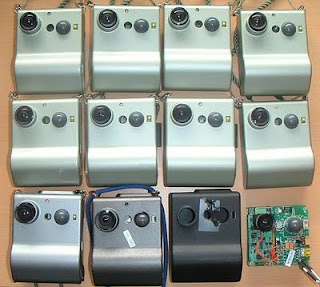